Last week I declared November Gratitude Month.  Immediately I began noticing an abundance of things to be grateful for:  my family, the ocean, Reese’s Peanut Butter Cups. These are no-brainers.  So I decided to challenge myself by cultivating appreciation for something that can draw a more mixed bag of emotion.

This week I am grateful for: My Body.

Before my total colectomy in 2011, I was a pretty active gal: hot yoga teacher, marathoner, etc.  If I didn’t wake up with tight hips and sore hamstrings, I wasn’t working hard enough.  I will spare you the gory medical details, but let’s just say my post-surgery body operates by a different set of rules.  It took me a long time to admit that, and even longer to accept it.

Ok, I didn’t really accept it.  I kept trying to do the same things I did before, as if I were some kind of colon-less Wonder Woman.  Then, after failing miserably, would say to myself, You just need to try harder.  And then perform the whole song and dance all over again.

I just re-read the memoir Waking by Matthew Sanford, who, at age 13, was in a car accident that killed his father and sister, and left him paralyzed from the chest down. Through the practice of yoga, he developed a keen mind-body awareness and a deep sense of compassion for his handicapped body.  It’s what he calls a “healing story.”

When I think of “healing stories,” a strong memory comes to mind.  Early in our relationship, Phil took me to a retreat run through Villanova called the HEC (Handicapped Encounter Christ).  Because that sounds like an obvious place for a third date.

The HEC, run by a gentle hippie Augustinian named Father Shawn and a group of lay people associated with the University, was an amalgam of Christian revival, Girl Scout camp, and a Grateful Dead show.  As one of the able-bodied participants,  you were responsible for changing catheters and other tasks I am pretty sure should have been handled by a licensed medical professional, not my boyfriend wearing a balloon hat.

But no one seemed to care who was doing the job as long as it was getting done.  Taking care of business left room for other activities, like dressing up in costumes, helping someone bang a tambourine with his elbows, and shot-gunning beers by an open fire. Safety was not a huge concern to the HECers.  They grabbed freedom where they could get it.

They just wanted to feel alive.

I was maybe 24 at the time, and was not the in a “grab freedom by the balls” phase of life. I was more in a rigid, neurotic, “I am going to control all the changes in my life by running 40 miles a week and eating only melon.”

I may not have known it then, but I really needed the HEC.  No one cared that I was such a hot mess, because they were all hot messes too, in their own unique way.  No one gave a shit if I ate the mashed potatoes or not, because most of them had mashed potatoes all over their faces.  I can say this with great fondness,  because we all laughed about it – no one took themselves too seriously.  Everyone made fun of themselves and each other, but in a loving way. It was pure, joyful madness.  It really wasn’t all that different from Thanksgiving with Phil’s family.  Relax, I’m kidding.

My experience is not so different from yours, it is only more extreme…We all live on a continuum of ability and disability.  The process of aging guarantees this – everyone eventually will become less able.

The humility of his comparison blows me away.  All changes in our bodies – whether it be a spinal cord injury or the post-pregnancy curse of peeing when you sneeze – require some degree of adjustment, compassion, and acceptance.  I don’t mean forced optimism. You know, when people say things like: “Why would you need another baby?  You have two beautiful girls!”

Maybe for some that’s helpful, but it makes me want to respond with: “You’re right!  Who cares that I can’t absorb nutrients or procreate?  I can still go to the circus and eat ice cream and dream about rainbows and unicorns!”

A blessing doesn’t cancel out a loss, like some kind of spiritual Jedi mind trick.  It’s about holding space for both the disappointment and the gratitude. Running long distances and having my kids made me feel alive.

So what can I do to feel alive right now?

Recently, after a failed attempt at a run, I chose to NOT kick my own ass or plan a new training strategy.  Instead, I went for a walk.  And the next day I went for another walk. Then, a few days later, I walked for a bit, stopped, laid in the grass and looked at the clouds.  I haven’t done that in 25 years.

When I see my body as fleeting and impermanent with a No Moneyback Guarantee,  I am more inclined to stop and thank it for what it does for me right now.  Because while I may not be able to do this:

I can still do this… 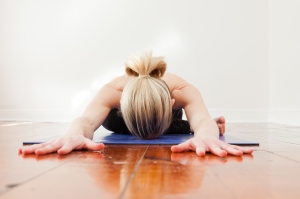 And that’s a lot to be grateful for.

What would make you feel alive today?