I was not a candidate for the traditional spring break.  The potential of finding myself in a No-tel in Ft. Lauderdale was not on my radar screen in my late teens.  My lack of exposure to this option may have been due to my strong Engineering affiliation, where my counterparts were psyched about unfettered access to the Material Science Lab so they could perfect their new carbon fiber lamination process. Talk about being high on fumes….those guys could party. Or perhaps my lack of Spring Break options was due to the fact that my non-engineering buddies and I had about $157 in collective net assets come mid-spring semester.

In my junior year, I was presented with the late opportunity to road-trip. Chris “GreenJeans” Deas’ twin brother had a place for us to crash for free. His brother was in school at Tulane… in New Orleans. And, oh, our spring break week coincided with Mardi Gras. Now THOSE people can party – it was certainly the first time I left a bar when the sun was already up.

To this day, the spring’s anticipatory longings of summer rising are best captured by music and knocking the dust off those summer playlists with open window car drives, front porch happy hours, and live music outdoors. And there is no place on Earth where the smell, sights and sounds of the spring-summer crossover are captured better than New Orleans. Especially the music.

That first N’awlins trip merely started my love affair with the city. It was consummated by a series of subsequent visits to JazzFest. While the music is always in the air throughout the city, JazzFest brings it all into focus.

Here is a sample of some summer standards as inspired by, discovered in the Crescent City.

(Disclaimer #1 –  To fellow music lovers – and especially Chris Scalera and IRV – The following is a list of standards, it does not remotely attempt to capture the fusion of blues, gospel, zydeco, jazz, creole that rolls through the streets nor does it tip the cap to the local favorites that are the baseline of the fest… Dr. John, Radiatiors, Subdudes, Meters, Neville Family…) 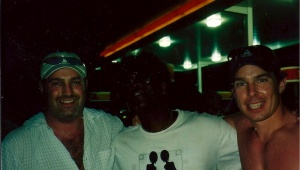 Van Morrison to me circa 1993 was the artist of the ubiquitous “Brown Eyed Girl” “Moondance” greatest hits cassette tape. I had little expsosure to his library – a problem I have since rectified – and even less to the soul of “The Man” and his flat-out all-in live performance approach. JazzFest changed that. Barely facing the audience, Van Morrison tore off full bodied renditions of songs some familiar, some gospel, some randomly howling and indecipherable. And then came Caravan. A song I knew but never heard. This is when I got Van Morrison – he literally exploded onto the song. To get a feel for it live, check out the version from “Gets His Chance to Wail Vol. 3”

2) This Ol’ Cowboy – Marshall Tucker
Music in New Orleans from all sources is bigger brighter and better. Even the jukeboxes are juiced. Across from the JazzFest fairground was a corner neighborhood dive-bar that spilled onto the streets. It is here that we spent our most endearing hours onstage with the band, pouring drinks behind the bar, pacifying gun-toting locals and playing the jukebox. My apologies to my companions, but I discovered this song from the jukebox “Across Da’ Street” and I played it into the ground. A perennial staple of summer playlists since that day.

3) Grateful Dead – Eyes of the World
No, I did not see the Dead at Jazz Fest – at least that I can remember. In fact, I was resolutely not a GD fan at the phase of my life. But a moment stands out for me when that turned. Upon return from the first New Orleans trip with my senses still primed, a college friend popped “One From the Vault” into the CD player on a Saturday morning hangover recovery session. And it was “Eyes of the World” that opened up my ears.

4) Blue Sky – Allman Brothers
I know I am careening into the passe here. But if you can picture standing in the sunshine with 60,000 other worshippers at the end of 3-days of live music when the Allmans hit the JazzFest stage, you will sense that this was no ordinary version of “Blue Sky”. It was one of my first summer songs and the opening guitar riff on a summer day is all I need to feel that a cold beer is in order. 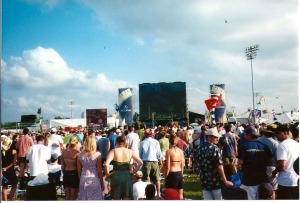 5) Who Shot the La-La – Oliver Morgan
So about being onstage with the band, “Across Da Street” had the local legend and one hit wonder Oliver “Who Shot the La-La” Morgan as their JazzFest house band one year. His band was in the party as much as being the party. And they were happy to share the stage – or to grab their instruments and proceed parade style into the streets. What could be better than a congo line with the band stopping traffic in all directions. Not much. As for “Who Shot the La-la”? I don’t know, but you can find it on itunes.

Wishing you many happy Spring returns, and looking for your Top 2, 5 or 50 spring/summer songs so I can compile a new playlist for the next time we meet. 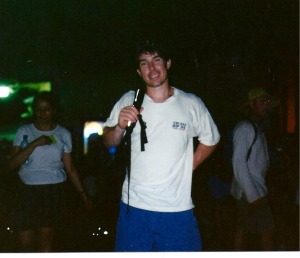 4 thoughts on “The Spring Break-Down, Part 2”