In an attempt to pull myself out of my writing slump, I recently re-read Writing Down the Bones: Freeing the Writer Within by Natalie Goldberg. There is a chapter called “The Ordinary and Extraordinary,” and in it Goldberg describes a trip she took to the Hopi land in Arizona to see the snake dances.  The snake dance festival is a ritual for the Hopi, and Goldberg describes the event as extraordinary….miraculous, even.

As I am reading this I am thinking: Ok….so there is a serious lack of Hopi dances in the suburbs of Philly.  So what do I write about?  Phoebe’s Friday afternoon tap and ballet?

But then Goldberg writes:

It’s not that we need to go to the Hopi mesas to see greatness; we need to view what we already have in a different way. If we see their lives and festivals as fantastic and our lives as ordinary, we come to writing with a sense of poverty.  We must remember that everything is ordinary and extraordinary.  It is our minds that either open or close.

I read this over and over, because I loved the idea of it – that something in my life could be seen as miraculous or extraordinary.

But I struggled with really believing it.

The truth is, ever since Phoebe started kindergarten I’ve been feeling a little…lost. Irrelevant. The what-the-hell-am-I-doing-with-my-life kind of feeling. I tried to fight it by being proactive. I committed myself to writing more, and volunteered to be Phoebe’s class mom.

But while I think about writing constantly, the actual act of writing seems to get lost somewhere between grocery shopping, laundry and car-line.

And as for the class mom gig – well, I suck at it.  I can barely organize events for my own two kids, much less 13 of them. This week I sent out an email to the other parents about the Valentine’s Day Ice Cream Social, and it took me two days. I re-read it ten times: checking and re-checking the email addresses, adding and deleting exclamation points.  How many smiley faces is too many?  It’s kindergarten, there should be smiley faces, right?  I am still recovering from dropping all the orange juice in the parking lot the morning of the Boo Breakfast. Right before I slammed the trunk of the car on Emma’s head.

My daily life as something extraordinary? Uh…I don’t think so. Except on the days I change the sheets on the top bunk bed. Completing that task without self-injury is nothing short of miraculous.

The minutia of motherhood aside, my inner writer was committed to the task of finding the extraordinary in my seemingly mundane life. But I needed a different angle, another point of entry, a different perspective. I needed to put myself in the shoes of a distant observer. But how?

I could pretend to be a stranger from another country, sent to observe a typical day in the life of an American stay at home mom…or better yet…

I could pretend to be an alien from another planet, sent to Earth to observe the behavior of an average, run-of-the-mill Earthling.

So I did what any wannabe writer committed to the art of procrastination would do: I downloaded the entire first season of Mork and Mindy.

I watched Mork and Mindy as a little kid, but all I remembered from it was Nanu-Nanu, Mork’s awesome striped vest, and Jonathan Winters hatching from an egg. 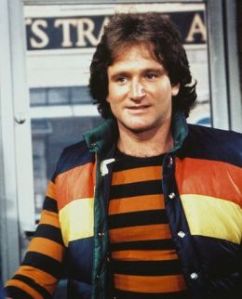 Mork was sent from the planet Ork to observe the emotional behavior of Earthlings. His mission was not to feel emotion, but observe emotion. But at the end of each episode, when Mork reports his weekly findings back to Orson (the leader of Ork), it becomes clear that Mork is not just watching life, he is living life. He becomes immersed in it. And he is super hot for Mindy.

Mork notices that Earthlings tend to immerse themselves in the business -and busyness- of life rather than life itself.  And what is life itself?

Virginia Woolf wrote about the  state of “non-being” that threatens to dominate our lives. We go through the motions of life, distracted, not fully present – embedded in “a kind of nondescript cotton wool.”

I spend a lot of time tangled up in the cotton wool. Why? Because so many things make me sad: dead leaves blowing in the wind, bare winter trees, most Johnny Cash songs, rain in January.  So I sit parked in car line glued to my phone rather than admire the statue of beautiful Mary standing outside my window, because Mary statues make me feel weepy (I’m not as loving as Mary! Mary would never drop the F-bomb in the Whole Foods Parking lot with Jesus in the car!). Also, I don’t want to be the Mom That Cries in Car Line.

But as Anne Lamott points out: “The bad news is that whatever you use to keep the pain at bay robs you of the flecks and nuggets of gold that feeling grief (or sadness, or loneliness) will give you.”

Life is determined to rid me of my black and white thinking.

For the last week or so, I have tried to become a Mork in my own life: innocent, observant and open to simply noticing. Some findings: 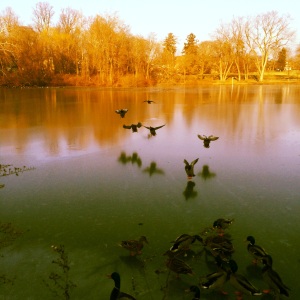 Emma holds Phoebe’s hand when she thinks I am not looking.

Our shadow-selves have longer legs than Gisele Bundchen’s regular legs.

Maybe I am not as irrelevant as I thought.

Some of these extraordinarily ordinary moments made me a little weepy, but feelings of melancholy were overshadowed by intense gratitude. For just being alive. Being alive is an extraordinary thing. Even when you are dropping orange juice and giving your kid a concussion before school. Even when you feel lost or stuck or like a general waste of space, it helps to stop and look around. Because the world is trying to show you that you are exactly where you need to be.

This is Jessie, signing off, until next week. Or maybe until after the Valentine’s Day Ice Cream Social. Nanu, Nanu.