It’s terrible how much has been forgotten, which is why, I suppose, remembering seems a Holy thing.

Last Friday was my Aunt Terry’s birthday. She died over three years ago – it will be four years in October. I can not wrap my brain around that fact.

I remember the last time I saw her in such detail: It is October 7, 2011 in a hotel in Jersey City, at my cousin Beth’s wedding. Emma is the flower girl and I am a bridesmaid; my dress is beautiful, a deep purple, or aubergine. 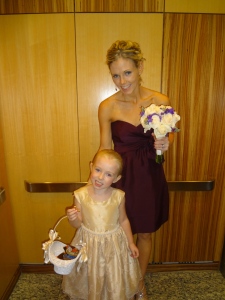 Aunt Terry has cancer. This is new information, yet to be fully digested by those who love her. But her oncologist has a plan, she is going to be ok, because she has to be. She dances at the wedding, and in my mind this means she will beat this. She is little but mighty. 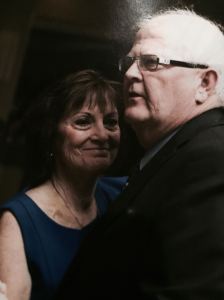 The morning after the wedding I pack our suitcases before heading down to brunch. Phil is in the shower and Emma is watching cartoons. I want to see Aunt Terry alone, before we all have to put our brunch faces on. I want to go down the hall and tap on her door, I want to climb in bed with her and smell her perfume. We will do the post-party recap; I will be a clown and make her laugh.

I didn’t go. I wanted to take care of her in some small way but I didn’t.

Aunt Terry was the one who took care of everyone else. The summer I turned 16 I was full of teenage angst; my parents and I were not seeing eye to eye. It was suggested (by whom I can’t remember) that I go hang out at Aunt Terry’s for a week . She taught me how to mow the lawn (which I still love to do) and parallel park (which I don’t).

We sat in her kitchen one night, dipping pretzels in ice cream when she asked: “Why are you so sad, Honey?”

It was the perfect thing to say.

At the wedding brunch I sit with Aunt Terry for a while, then we all gather our stuff to leave. Phil loads the car while I check out. Aunt Terry and Gary are standing behind me. As Gary returns the key cards I turn to her and say: “I am going to come see you in Virginia, I can help. We can lay in bed and watch Modern Family for eight hours straight, ok?”

I wrap my arms around her but she seems so delicate, I am afraid of upsetting the chemo port in her chest. We say I love you and I walk the few steps to the escalator. I can see Phil and Emma through the glass window, waiting in the car below.

The image of Aunt Terry standing in the hotel lobby as I step onto the escalator is burned on my brain. I can see the light coming in the windows, creating patterns on the carpet. The cylindrical shape of the vase perched on the desk. The flowers are autumnal – yellow and orange. Gary runs his fingers through his hair; he is distracted, he wears his fear on his face. Aunt Terry leans into him, letting his body support her, and a feeling comes over me that is difficult to name – an unshakeable chill, my heart sinking into my stomach like a stone.

I wonder if a part of my brain knew this was the last time I would ever see her. That in three weeks, she would be gone. I wonder if my brain bypassed my magical thinking and said, You will want to remember this.

Lately I have been thinking a lot about memory – why we remember some things but not others. Sometimes it feels so random, even bizarre, the things that stick in my crawl: the outfit I wore on the first day of 7th grade, the distinct grape smell of Aussie Sprunch Hairspray, the notes and fingerings required to play “Louie Louie” on the mellophone.

I remember bits and pieces of both my daughters’ births, but they are fuzzy, like pieces of a dream. Yet I distinctly remember Emma coming to the hospital to meet Phoebe for the first time. She was wearing a white shirt with green and yellow butterflies. My mom had put a green bow in her hair, along with a bunch of bobby pins “to keep it in place.”

As she stood peering into the bassinet, her face a mixture of curiosity and skepticism, I remember thinking: Emma looks enormous. Like Alice in Wonderland kind of huge. I turned to Phil and before I could even speak he leaned over and whispered, “Yeah she looks 12 feet tall. It’s freaking me out.”

Maybe it’s the things that feel out of place that stick. The mind’s way of making sense of a new reality, turning it over and upside down like a Rubik’s Cube. Maybe those are the things that float around until the brain finds the right compartment to place it in. But for some things, there is no compartment. So the brain gives up, and the memory just keeps on floating in and out of the consciousness.

This is not a scientific theory. It is a Jessie Theory (which is decidedly un-scientific).

I just finished reading Patricia Hampl’s I Could Tell You Stories: Sojourns in the Land of Memory. In the essay entitled “Memory and Imagination,” she writes:

We store in memory only images of value. The value may be lost over the passage of time, but that’s the implacable judgment of feeling: This, we say somewhere within us, is something I’m hanging onto. And, of course, often we cleave to things because they posses heavy negative charges. Pain has strong arms.

There is a planet of regret that accompanies my final memory of Aunt Terry. It can be all-consuming, suffocating – crushing all other thoughts of her with its hugeness. But now, almost four years later, I am beginning to feel a shift – a making way, making room for other memories to surface.

Aunt Terry made PB & J on white bread with peanut butter on both sides so it sealed in the grape jelly, preventing sogginess. Her iced tea was perfectly sweet. She loved to play games -Spoons, Jenga, Outburst- and she played to win. She liked to dance, anywhere, anytime. We both snort when we laugh. She taught me how to tie the perfect bow for a Christmas wreath. She could eat just one cookie. She laughed at my jokes. I would do anything to make her laugh. I miss the sound of her voice saying my name.

In her memoir The Long Goodbye, Meghan O’Rourke writes about grief:

It’s not a question of getting over it or healing. No; it’s a question of learning to live with this transformation. For the loss is transformative, in good ways and bad, a tangle of change that cannot be threaded into the usual narrative spools. It is too central for that. It’s not an emergence from the cocoon, but a tree growing around an obstruction.

As time marches on, I pray that more memories will continue to bubble to the surface. That I will learn to grow around what I didn’t do, or what didn’t happen, of what wasn’t. I want to grow with tall branches toward the light of what did happen. Of what was.