“My dog is dead and we’re moving.”

This was how Emma greeted her bus stop pals on the first day back to school in 2014.  Happy New Year!

But that’s my firstborn.  In all of her 7.5 years, she has never been one to sugar coat things, and she tells the truth.  The whole truth and nothing but, whether you’ve had your coffee yet or not.  So put on your helmet.

Our dog is dead, as you already know, and yes – we are moving.  AGAIN.  When I told my friend Kathy she said, “You move more than an army wife.”  Yes, except we are not nobly sacrificing ourselves for the good of this country, nor is Phil out in the trenches fighting for freedom and justice for all.   He is fighting to make “validation sexy.”

Alas, it is a position within his current company that sends us back to our beloved Philadelphia – 18 months, 2 rentals, and 1 house purchase later.

This was a bit shocking at first.  We have only been in this house for six months.

I’m still unpacking from the last move.  It was only a month ago that I got one of those silverware drawer organizers at Bed Bath and Beyond.  Opening that drawer gave me such pride in my attempt at organization.  But now, as I reach for a fork – destined to be thrown back in a moving box – I think, I can’t believe I actually used a tape measure for this shit.

I am not going to lie, I spent a day in my snowman pajamas.  I wondered if Phil had unconsciously manifested this re-re-location by never changing our license plates.

I just felt so…..torn.  Sure, there are many benefits to moving back to Philadelphia:  family, old friends, the Phillies, WaWa….

God I do miss WaWa.

But, even a 24 hour store that has everything from Midol to mac-n-cheese cannot compare to this:

Yet compare is what I continued to do.

In high school, I had a friend who was trying to decide between two colleges: Tulane and JMU.  They were both great schools and she was having a hard time choosing, so she made a comparison chart.  I only remember the first bullet point:

She went to JMU.

I began to notice that both Phil and I were taking the Smelly-Not Smelly approach in order to feel better about our decision.  For example:

Boston: Lobster Rolls (no thanks)

One night over a glass of wine, a rapid-fire compare and contrast ensued: Boston doesn’t have a Liberty Bell!  The ocean is too cold in the winter!  It’s a 30 minute drive to Target! I hate clam chowder!

With the Bashing Phase over, I moved into the Avoidance Stage.  I stopped going for runs along the rocky cliffs.  I drove circuitously in order to avoid the scenic route through the harbor, where, on a clear day, the sun reflects off the water and the lighthouse stands proud in the distance.

The Avoidance Stage came to a reluctant end when I ran out of episodes of The Real Housewives of Anywhere.  I had no where left to hide.  Now I had to actually let myself think and feel again (dammit!) and ask myself, Ok, what is going on, here?

I was scared.  Scared of feeling sad. Scared of missing this truly magical place and the people in it.  Scared of never being as happy as we have been here.

Then I read this line in a daily reflection book by Julia Cameron:

Life is what you make it.

Our life here in Scituate has been awesome and abundant because we decided it was going to be awesome and abundant. When Phil’s work brought us to New England, we literally picked a town off the map of MA and said, “This feels right -let’s try here.”  This was huge for us, having always lived near family and in familiar places.  Sure, there was some lonely moments, but we dedicated ourselves to believing our own bullshit: “This is going to be GREAT.  This is going to be the best thing we’ve done YET.  We are going to meet some amazing people.”

But this move back home to Pennsylvania holds the same possibility of abundance and awesomeness – if we choose to invite it in.

Emma said at bedtime, “What if I don’t make any friends?”

“How is it impossible?”

“Everywhere you have ever gone, you have made friends.  You made friends in the sandbox, at the playground, on the beach, in school.  You make friends because you love people.  So all evidence supports you making friends again in Pennsylvania.”

She seemed to accept this as plausible.  I think because I used the word evidence.

Acknowledging the good you already have in your life is the foundation for all abundance.   -Eckhart Tolle

Life is so good right now.  And there was a time where I might have said, “Well, this is as good as it’s gonna get. I’ve filled my happiness quota. It’s all downhill from here.”

But this line of thinking made me a miserable f***k.

So I’m adopting an attitude of abundance. Instead of assuming every blessing will be my last, I will assume there are an infinite amount still waiting for me…for us.

I am still sad to leave. 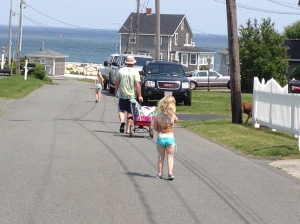 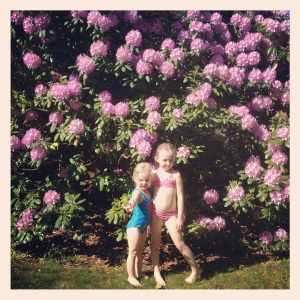 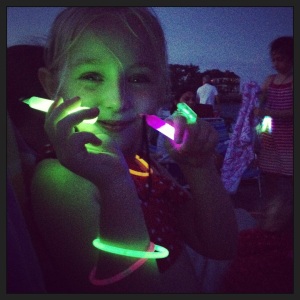 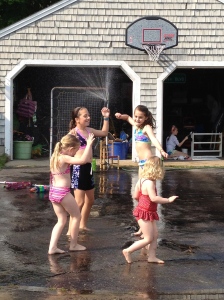 But I am even happier to have been here.

24 thoughts on “My Dog Is Dead and We’re Moving: How to Choose an Attitude of Abundance”