If you live in the dark a long time and the sun comes out, you do not cross into it whistling. There’s an initial uprush of relief at first, then -for me anyway -a profound dislocation. My old assumptions about how the world work are buried, yet my new ones are not yet operational. There’s a death of sorts, but without a few days in hell, no resurrection is possible.

Easter has never been my favorite. The big creepy bunny breaking into your home, the Cadbury Eggs with their mystery yokes, the church filled with incense that inevitably makes someone pass out, Charlton Heston as Moses…I find it all a bit overwhelming.

My daughters go to a Catholic school. On the last day before spring break, the upper grades performed the Passion Play for the younger ones. Phoebe climbed into the car after school, buckled her seat belt and announced: “The Passion Play is very disturbing. I am so not into Resurrections.”

Apparently Easter is not her favorite, either.

This year, we spent spring break with my parents in Florida, which was a welcome change of scenery for all of us. It’s been a long year. It felt miraculous to get on a plane in a sea of grayness, and then three hours later step into the sunshine; a technicolor world filled with blue skies and palm trees, the warm air thick with the scent of hibiscus and honeysuckle. Like stepping out of Kansas into Oz.

On Easter Sunday we go to church. Phoebe is antsy – climbing all over me, making funny faces at the people behind us trying to get a laugh. I can’t really blame her. I am antsy, too. I try to distract myself with people watching: little girls in pastel dresses and Easter hats, the choir of senior citizens dressed in Tommy Bahamas and golf pants, the ushers in white blazers tending to the poor guy who just passed out thanks to the incense.

Phoebe climbs in my lap and stage whispers into my ear: “How do you feel about Resurrections? Because I am SO NOT INTO THEM.” Then she goes back to stacking missalettes. I guess it is a rhetorical question. But I sit and think about it.

I believe in resurrection, in needing to die in order to live. I believe there is always an opportunity to begin again, if you are brave and curious. I believe in do-overs. I believe in second chances, third chances, 5,000 chances – however many chances you need, I will give them to you. Fool me once, fool me twice, fool me a hundred times…I don’t care. I would rather be foolish than unforgiving.

After church, we all pile into my dad’s car and inch our way through the sea of senior citizens in Cadillacs. Phil reads from the church bulletin: “Wow, two married couples renewed their vows in this church yesterday. Both have been married 75 years.”

The word Resurrection comes from the Latin resurgere: to rise again. I think of the couples married three quarters of a century and wonder how many times they had to die and rise again, to forgive, to create something new from the ashes, to find their way back to joy. Marriage is, in a way, it’s own easter. It is nails and crosses and suffering; it is betrayal and sacrifice and pain that can feel suffocating, almost unbearable.

But then, somehow, you both survive. You escape your tomb of anger and can breathe again. You share a laugh about something – a deep belly laugh that makes your eyes water. You can’t remember the last time you laughed like that; it feels like a lifetime ago. Then, as you both wipe away the tears, you stop and look at each other in disbelief. Holy shit. We are still here. We are going to make it. It is nothing short of miraculous.

After church we go to the pool. I watch Phil play for hours with the girls. He makes up crazy games with tennis balls and plastic cups; he lets them dive off his shoulders. I want to grow old with this man. The thought sneaks up on me, startles me even. I do not typically let myself think that way. I am hardwired for disappointment, for impending doom. Don’t count your chickens and all that. To imagine growing old with someone is a jinx, I have always reasoned. That kind of optimism will get you run over by a Septa bus.

Phil does a handstand in the pool. I decide to let go of my fatalistic superstitions. In the spirit of Easter, I will let that habit die. So I look around the pool, a veritable AARP convention, and wonder which old couple Phil and I will turn out to be.

Will we read silently in straight back chairs, me immersed in a large-print library book and Phil with his nose in the Wall Street Journal? Will he sit on the edge of my lounge chair while I rub sunscreen on his spotty, barnacled back? Will we share a chicken salad sandwich under the umbrella, or float around on pool noodles – Phil wearing cataract sunglasses and me in a visor the size of a toilet seat?

My fantasy is interrupted when a soaking wet Emma plops down in the chair next to me. I ask her, “What do you think I will look like when I am old?”

She tilts her head and shakes water out of her ear. “I don’t know,” she says. “But promise you won’t wear one of those visors.”

The last morning of vacation, Phil and I wake up around 5:30 and drive to the beach for an early morning walk and swim. We walk to the edge of the fishing pier and people watch. An old man fishes off the corner of the pier patiently waiting for a bite; his wife sits at his side doing the crossword. I wonder if they do this everyday, if this is their routine.

We leave the pier and comb the beach for treasures. Phil discovers a starfish tangled up in the seaweed.

I find a lightening whelk whose inhabitant has fled it’s home. It is a sinistral shell, meaning the opening is on the left instead of the right. I know it is a lightening whelk because of the vibrant stripes that line the shell like bolts of lightening.

I wonder if this bad luck, I think to myself, a shell opening to the left. The downward spirals probably symbolize death or your life going in the wrong direction or something. Phil and I are both left-handed. I used to think this was bad luck, too, that our kids were destined to be freaks. But they turned out ok (and right-handed), so I let that one go.

We strip down to our bathing suits and dive into the placid blue-green Gulf of Mexico.

We float around for a while, I even indulge Phil in some ocean PDA, as the beach is mostly deserted at this early hour. I climb out of the water and notice an older couple sitting under an umbrella in beach chairs that face the sea. They sit side by side, sipping coffee from a red thermos. They keep their eyes on the horizon, but speak to each other in quiet morning voices. 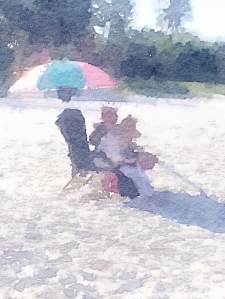 There we are, I think. That is us.

Maybe marriage is a lightening whelk. As you get old, saggy and wise together, you shed the baggage that requires too much energy to carry. Like the whelk, you spiral counterclockwise, descending, returning, back to who you really are, to who you were both born to be.

We shall not cease from exploration

And the end of all our exploring

Will be to arrive where we started

And know the place for the first time.